The birth of a myth

Robert, the 6th Duke of Normandy was on his way home from a hunting trip, ‘amidst the spring’s first blossom’, when he noticed a young village girl standing near a fountain. They were both aged seventeen. Her name was Arlette. She very quickly became Robert the Magnificent’s official concubine, his ‘frilla’. The Norman Dukes thereafter preserved this ‘Danish’ conjugal tradition by which their children, be they legitimate or not, were considered as equals. Little William was born at Christmas time in 1027.

Arlette of Falaise and the Fountain

Arlette’s Fountain is located near Falaise Castle in Calvados. It marks the site where Robert the Magnificent is said to have fallen in love with the young girl, and to have taken her as his wife.
He was on his way back from a hunting trip, and she was busy washing linen. It was love at first sight and he asked her parents for her hand.
Although certain sources advocate she was a tanner’s daughter, it would appear that Arlette’s father was in fact a mortuary employee.
Other legends suggest she was the daughter of a Scottish princess or of a Belgian leatherworker.
We know very little about Arlette, other than that she was one of Robert the Magnificent’s spouses, with whom he had several children, among whom William the Conqueror, Odo of Bayeux and Robert of Mortain .
In Normandy’s Viking-inherited tradition, it was commonplace for a man to have several spouses, and several children from each union.
Although, for Christians, William was considered to be a bastard, Robert regarded him simply as one of his children, and whether he was the son of his first or his last frilla was of no importance.
It was for that reason that he bequeathed the Duchy of Normandy to Arlette’s son William.
It seems that Robert the Magnificent later lost interest in Arlette, presenting her to another man, Herluin de Conteville.
Other sources claim she only married him as a widow, after Robert’s death.

Visitor’s can still visit Arlette’s fountain today, to discover the very spot where William the Conqueror’s mother-to-be met his father, with whom she fell immediately in love. Their encounter is depicted on a fresco on the wall. It portrays Robert the Magnificent on horseback, staring at Arlette as she washes her linen with other young women. 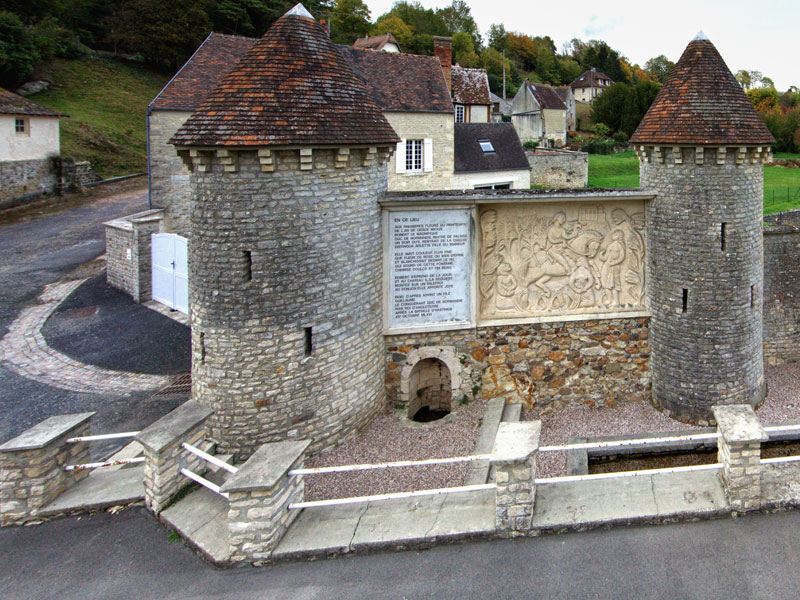