When the Normans landed in England...

William, Duke of Normandy’s conquest of England is recounted along this seventy metre long tapestry. More than just a simple account of the event, this woollen embroidery is a genuine work of propaganda, prizing William and his half-brother Odo, Bishop of Bayeux.
William had been designated by his cousin Edward, King of England, as his rightful successor, and could not let his rival, Harold, take possession of his Kingdom. Consequently, he had an army and horses mount onboard hundreds of ships before crossing the English Channel.
Nevertheless, the story related in the Tapestry also embraces a hint of mystery: why did Edward, the aging King of England, send Harold, Earl of Wessex and pretender to the throne, to meet with William? Was Harold’s oath sworn of his own free will? Who does the dwarf Turold serve?

The Bayeux Tapestry is also known as Queen Matilda’s Tapestry. For indeed, although no proof attests the origin of this embroidery, legend would have it that Queen Matilda and her ladies-in-waiting produced the work.
However, recent research led by Caen University historians specialising in the medieval period, has revealed that the Bayeux Tapestry was most probably produced in Kent in England, immediately after the battle.
Other sources advance that it was embroidered at the Abbey of St-Florent-de-Saumur, which was home to the most experienced textile workshops at the time.

The Bayeux Tapestry is said to have been commissioned by Odo of Bayeux (Bishop of Bayeux from 1049 to 1097 and William the Conqueror’s half-brother) to adorn the nave of Bayeux Cathedral, which was completed in 1077.
The production of such a work must have required two years, and is believed to have been realised as an educational illustration of William the Conqueror’s glory. Since most people at the time were illiterate, a visual work such as the tapestry offered a means of communication with the entire population.
It was also intended to moralise, for it depicts William the Conqueror advocating Good, whereas Harold is portrayed as a deceitful traitor, symbolising Evil.
Embroidered between 1066 and 1082, the cloth covers a total length of 68.3 metres for a height of 50cm and weighs 350kg.
Each scene includes a Latin caption. This is why historians refer to it as the first ever comic strip, or the first animated film in History.

The Bayeux Tapestry, a unique masterpiece

The Bayeux Tapestry is listed on the Unesco Memory of the World Register since 2007. Although it travelled much over past centuries, it can now be admired in the Bayeux Museum.
And even if it was produced in the 11th century, the embroidery continues to inspire historians. Firstly, because it is one of a kind and offers an excellent insight into life in the Middle Ages. Secondly, the Bayeux Tapestry remains, to this very day, full of mysteries.

The mysteries of the Bayeux Tapestry

The relevance of certain characters depicted on the tapestry is as yet unknown. Yet, they very probably played an extremely important role at the time, for only a few of the 636 characters are actually named. Designated figures are essentially of historic importance, such as William the Conqueror, Harold Godwinson, Edward the Confessor or Odo of Bayeux.
So who is the mysterious woman, named Ælfgyva – the only female character to be named on the Bayeux Tapestry? As well as being one of the 3 women out of a total of 636 characters, she is the only one to benefit from a written reference.
The role of other named characters on the tapestry also remains unclear, for we are still unaware as to why the horsemen Wadard and Vital (who were among William’s companions during the Norman Conquest) are specifically named. The same applies to the dwarf Turold.
Furthermore, the last scenes of the tapestry have either been lost or were never completed. However, all specialists agree that the epilogue was most probably in the form of a scene depicting William the Conqueror’s coronation in England. As yet, the mystery of this unfinished work has not been solved. 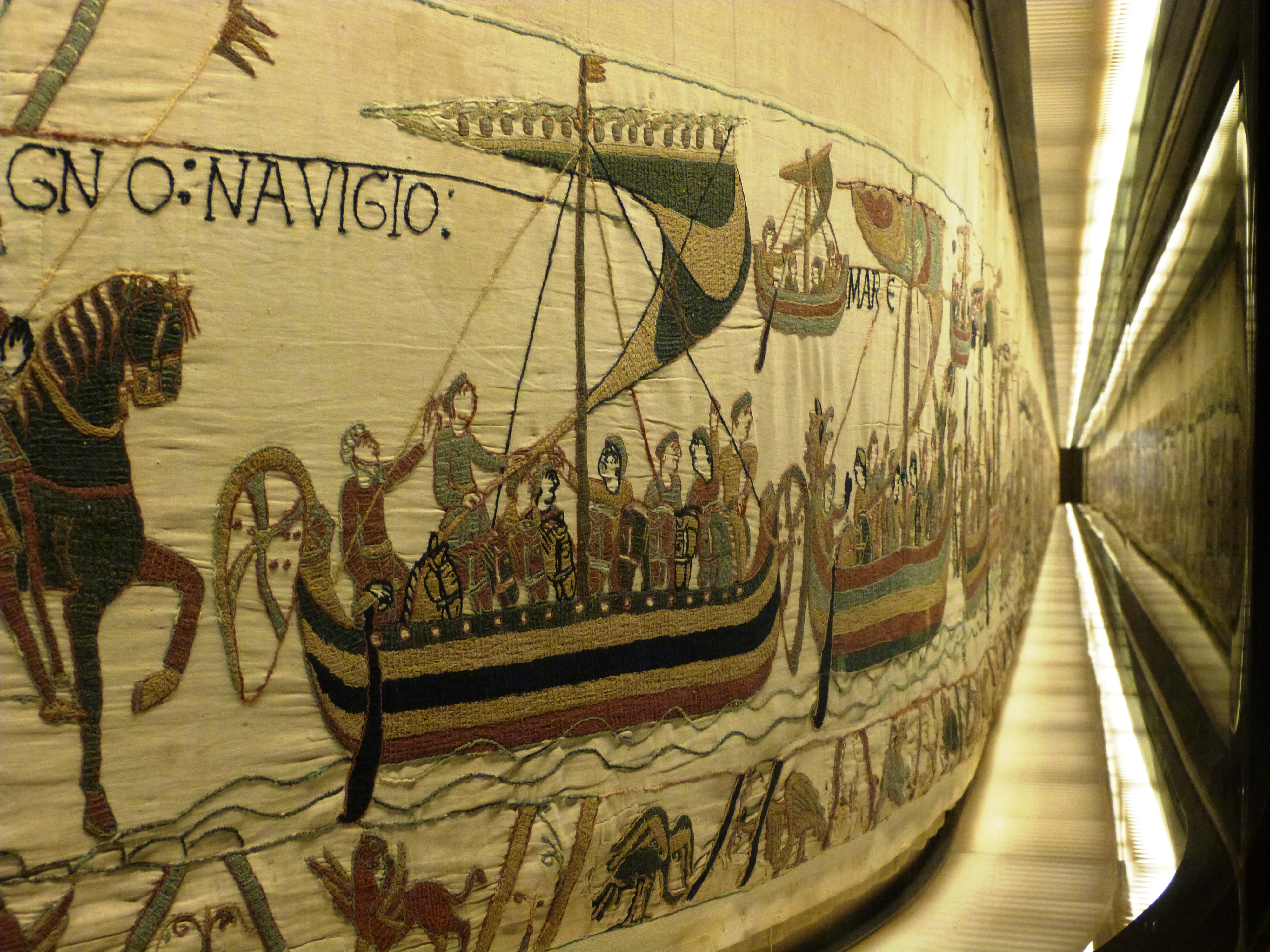 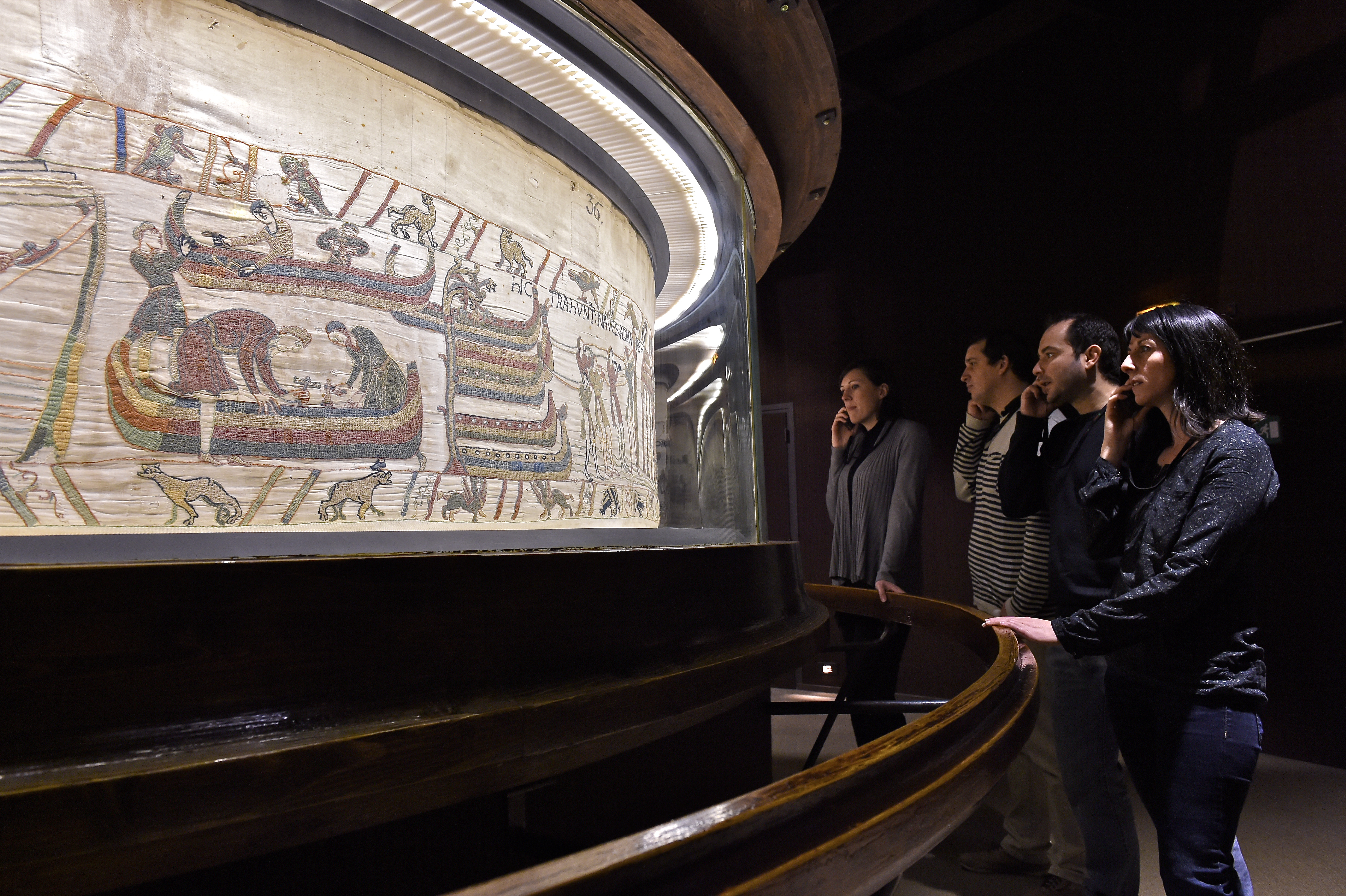